BikeBound, an online destination (94,3k followers) for custom, classic, and retro motorcycles from around the globe. featured our DR650 on their online platform BikeBound.com. They learned about our custom bike via Instagram after 2 hours the DR was online and contacted TPCustom for an interview.

This is the link to the interview about this bike and the inspirations of the builder.

September 28, 2018 by bikebound in Custom Motorcycles 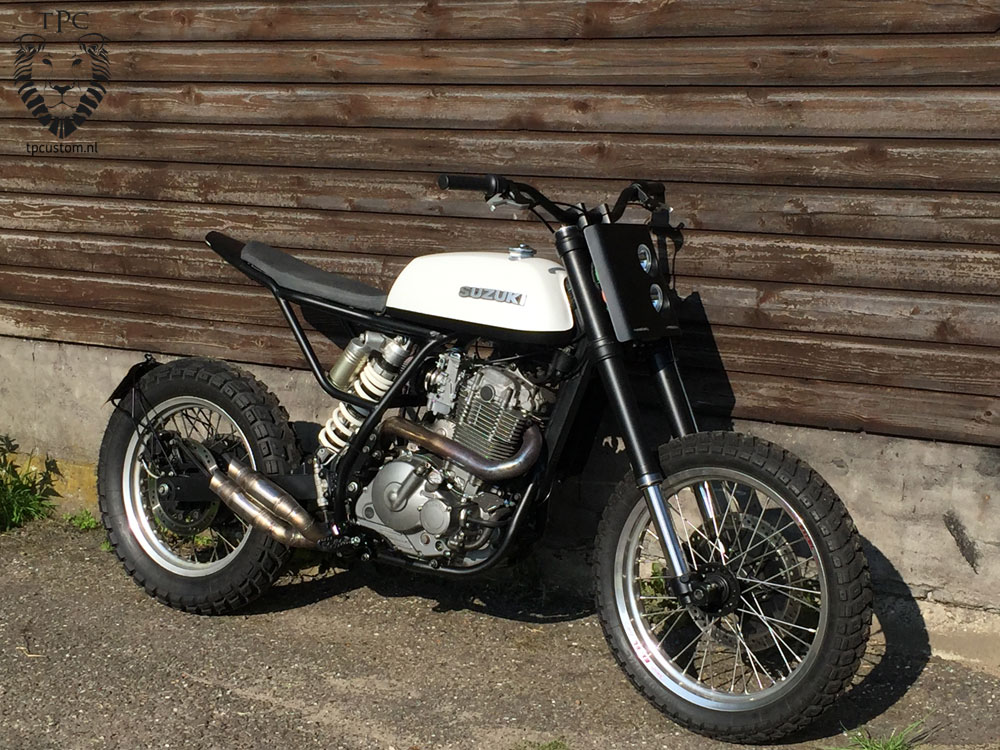 When Thomas Kortenbach was just seven years old, he watched his first motocross race on his family’s black-and-white television set. To say that MX race was influential on young Thomas would be an understatement —  he was hooked! Today, he and his girlfriend operate TPCustom in the Netherlands — a custom workshop that does everything from cars and bikes to incredible mobile coffee bars, caravans, and custom interiors. They even spend their holidays dirt-biking around France!

Thomas decided to build this 1996 Suzuki DR650 as an ode to that old black-and-white TV, with a B/W color scheme and minimalist design. The end result is one of the sleekest big single trackers we’ve seen, with loads of custom work and some funny stories along the way.  We particularly enjoyed the story of Thomas getting his girl’s yoga mats caught in the bandsaw while trying to make the cushioning for the seat — quite the mess!

Below, we get the full story on the build! When I was 7 years old, I saw a motocross event on our old black and white TV. Ever since I wanted nothing more than a MX bike, used to do nothing else than draw them and dream about it.

So the inspiration was the MX event in the ’80, and the black and white color theme of the DR650 is kind of an ode to the crappy old B/W TV.

I never had the money to buy the cool stuff so I had to improvise and build it myself. Now at age 40 I’m running TPCustom, my small company in all kinds of custom builds — car and bikes, metal and wood, engineering and carpeting.

A year and a half ago, my girl joined me in the company and we run it together. She is amazingly inspiring since she is complementary for the business as well as making the buddyseats of our projects, for example… And is crazy enough to go dirt bike riding for a week for our holiday in France. 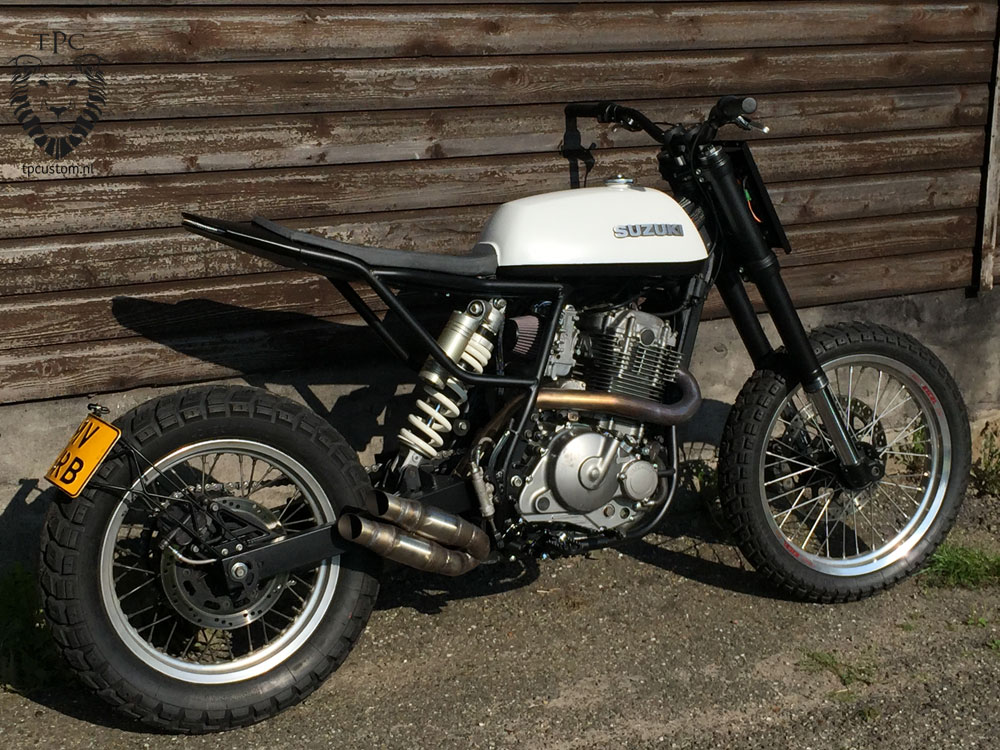 It started with a blue DR650 RSE from the year 1996. When I bought it, I actually rode it home in the pouring rain. And managed to get on the highway the wrong way for an hour and almost ended up in Germany. Turning around meant I had to do two extra hours of shitty rain riding… But I had fun on this bike and was already building my Tracker in my head.

I soon knew it needed better suspension, so I got me some KTM 525 EXC front forks and SX rear suspension. I like the minimal designs best, so I really wanted the clean look. After two weeks of discarding every option on the handlebar switch options I finally had the right idea. 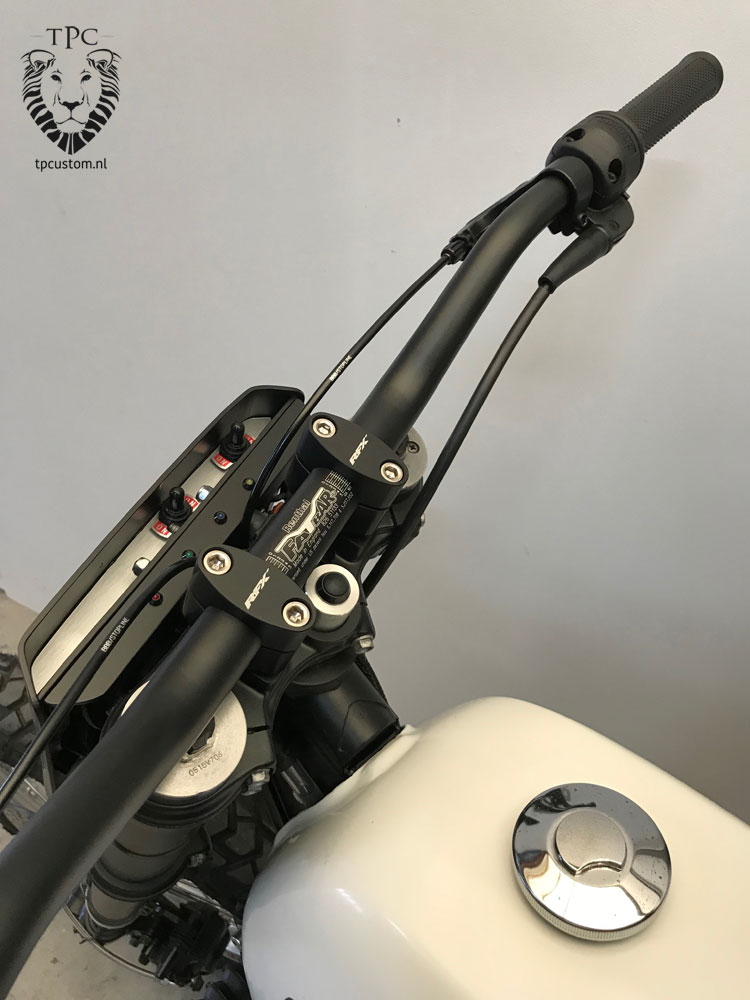 I ended my internet account and had to return the router. At the back of it was a reset button, not bigger than 3mm. I trashed the thing and got the tiny switch out. You can see the detail where I put it in the picture of the handlebar. Built it within the throttle cable housing, which I am probably most proud of…

About the only thing that’s original on the bike is the center frame, engine and rear wheel.

The front wheel is reduced to a 19” for better road use and looks. The tail is aluminum and holds the LED rear lights and blinkers. The design is like all my build in a ducktail kinda way. 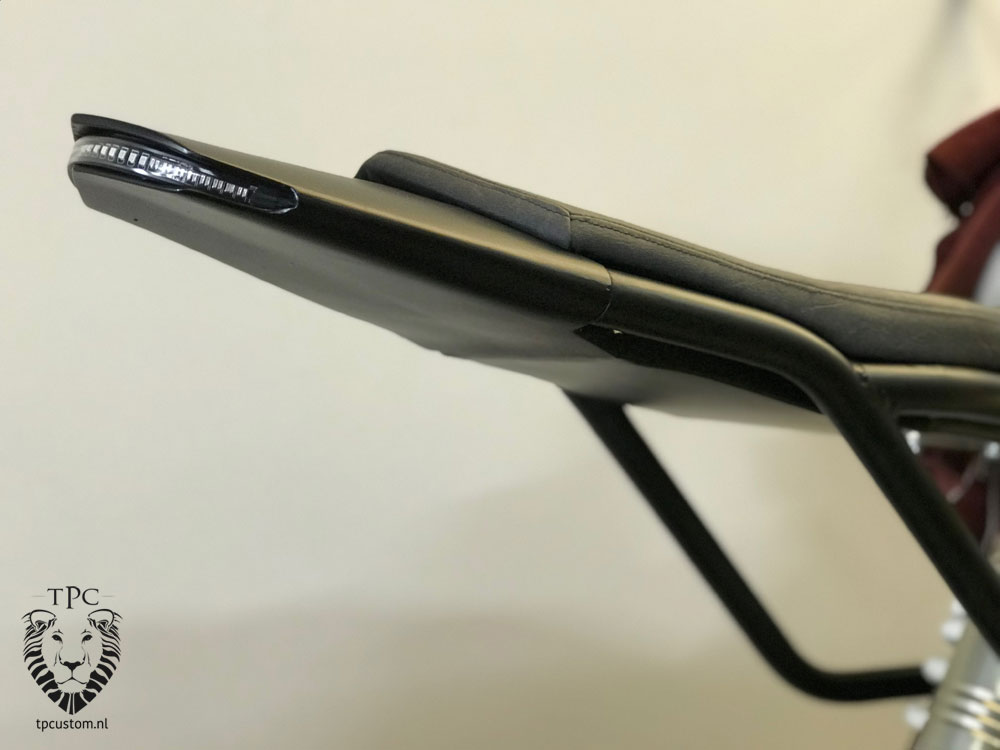 The seat hub is Chromolybdeen and holds an alu tray with the technics and two very flat batteries. I used my girl’s yoga-mats for the buddyseat. Which actually got stuck in my bandsaw machine and made a mess. This buddyseat ended up fitting better to her H/D Sportster 883 Tracker and is now part of that build. She made me a new one way better suited to the DR minimal design. Also fabbed up from the Yoga mats, so every time I ride I’m doing this yoga thingy, but more in my own way… Kinda hard to see is the extra custom made muffler behind the engine and under the rear fork. I had to lower the footpegs, as I am 193cm tall and wanted to ride the bike myself. 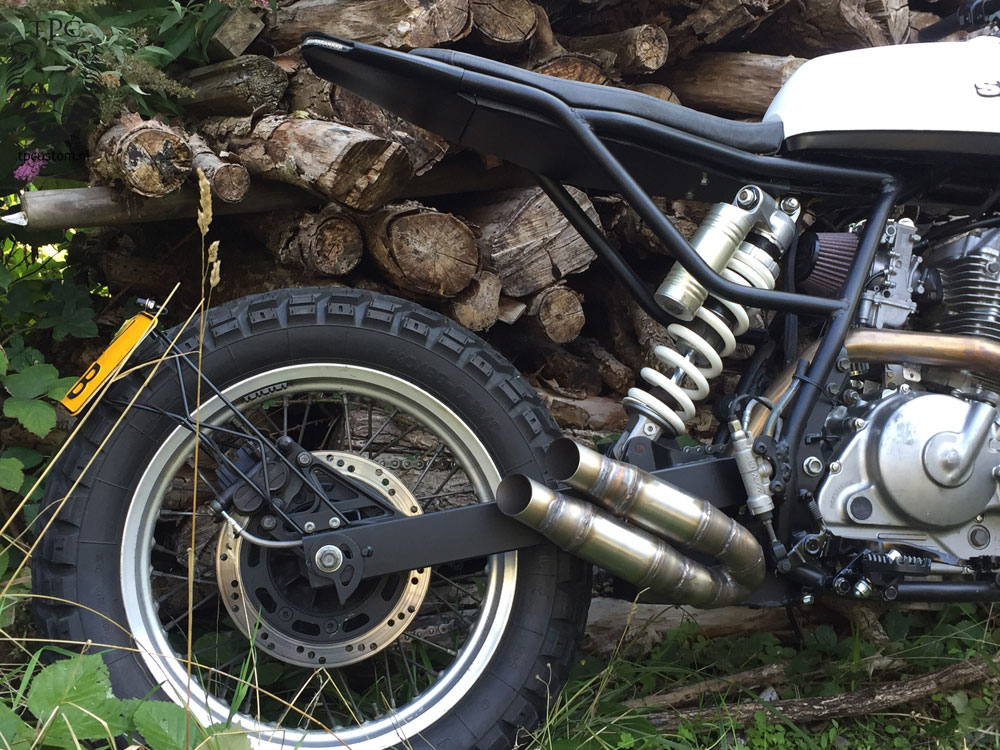 Power-wise, I upgraded to a TM40 pumper carb which gives the bike a bit more grunt and me a bigger smile. 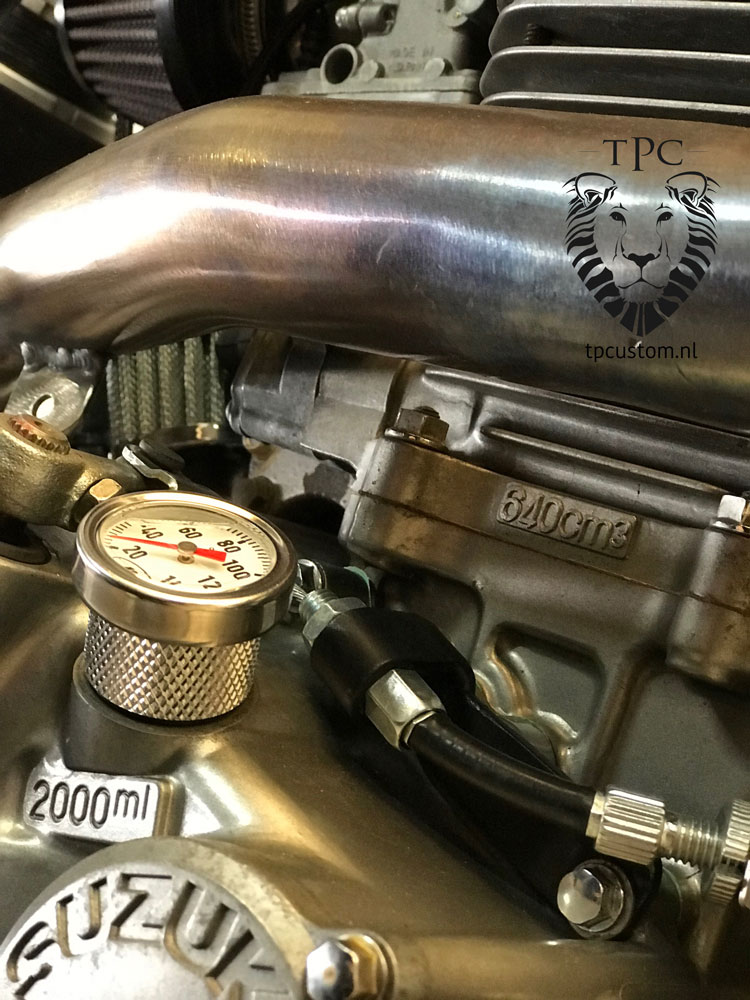 The gas tank was a harder story… I purchased a couple of tanks that all got discarded. Knowing what I wanted I got a gas tank off a moped Suzuki AP50. It was rusted and way too small to hold any amount of gas. So I chopped it, built a new underside and lowered it and so increased the size to about 14 liters. But I did get to keep the old school Suzuki badges! 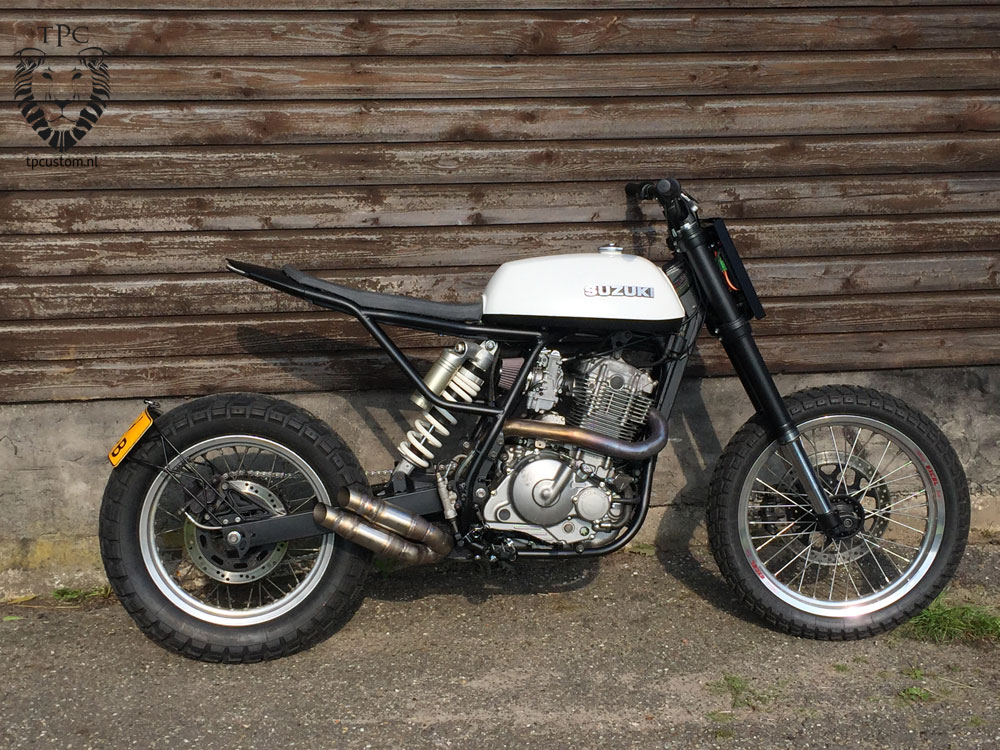 Headlight… pfff… Minimal, small, hold the CDI unit etc. Nothing to find. No lights to find small enough. So bought one. Got the lights out and build my own one out of aluminium.